Report of the Forrest Divorce Case 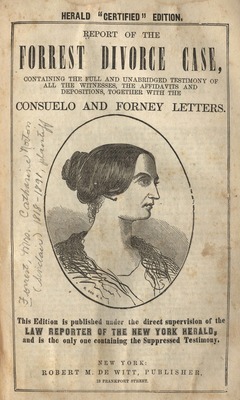 This volume contains several famous mid-19th century cases involving women. Shown here is a report of the Forrest Divorce Case, which took place in the winter of 1851-2. Catherine Norton Sinclair Forrest sued her husband Edwin Forrest for divorce. The trial lasted six weeks, and was a source of dramatic entertainment, as Edwin Forrest was a famous actor and both and accused each other of infidelity. Catherine won the case and was awarded $3,000 per year in alimony, but Edwin refused to pay. Following sixteen years of appeals, he was ordered to pay $68,000 and $4,000 per year thereafter. Upon his death in 1872, Catherine received $100,000 from his estate.