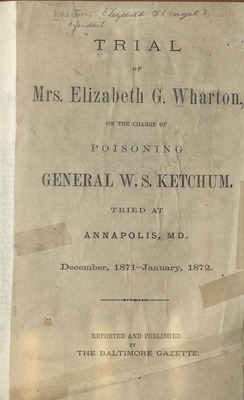 Elizabeth Wharton, a wealthy and well-known widow living in Baltimore in 1871 was accused of murdering General W. Scott Ketchum and attempting to murder Eugene Van Ness by poisoning. Both men visited her house and fell ill with the same symptoms. Van Ness recovered, but Ketchum did not. Most of the prosecution's testimony came from the medical professionals involved in the case from the University of Maryland; the defense's came from Washington Medical School. The doctors used the trial to attack the other school's reputation. Ultimately, Wharton was found not guilty. Following the trial, there was a push in Maryland for unbiased medical experts and higher standards for medical evidence.