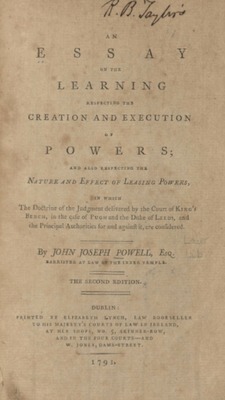 This is one of many books printed by the prolific Elizabeth Lynch (neé Watts). She was first married to the bookseller, stationer, printer, and circulating library keeper Richard Watts. He was bookseller to the Courts of Law and printed mainly law books, with a shop in Skinner-Row in Dublin. Elizabeth took over his business after his death in 1762. Four years later, she married Reverend Stewart Lynch, who was also a bookseller. Elizabeth continued to operate her business until her death in 1794, frequently collaborating with other printers including Sarah Cotter, whose work is also featured in this exhibit.