The Industrial Evolution of the United States 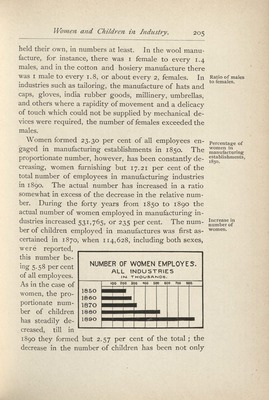 Carroll D. Wright was the United States Commissioner of Labor from 1885-1905. Through this history of the industrial revolution, he traces the emergence of women in the workforce. The chart featured on this page illustrates broad social and economic changes that resulted from the industrial revolution. With new technologies, it became increasingly socially acceptable for women to work outside of the home over the course of the nineteenth century. Women were not paid at the same rate as men and were often employed temporarily or in positions with no upward mobility. As a result of these social and economic changes, women began to advocate for the right to vote and increased rights to own property.