Purchased at Sale of Robert Nelson by James Semple

The Rules of Evidence on Pleas of the Crown: Illustrated from Printed and Manuscript Trials and Cases volume 2 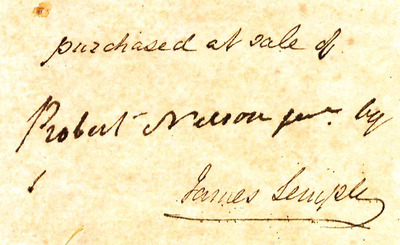 Robert Nelson was the fourth professor of law and police at the College of William & Mary. He assumed the role in 1813 after the death of his uncle, William Nelson, and held the position until his death in 1818. James Semple was appointed the fifth professor of law at the College of William & Mary in 1819 and would remain in that role until his death in 1834.