A Treatise on the Law of Bankruptcy and Insolvency

Reports of Cases argued and Ruled at Nisi Prius: in the Courts of King's Bench and Common Pleas, from Easter Term, 33 George III. 1793 to [Michaelmas Term, 46 George III. 1806, both inclusive], volumes 1-3

An Abridgment of the Law of Nisi Prius,volumes 1-2

A Selection of Leading Cases on Various Branches of the Law: with Notes, volume 2

Commentaries on the Laws of England, volume 2

A Selection of Leading Cases in Equity: with Notes, volume 2

The Rules of Evidence on Pleas of the Crown: Illustrated from Printed and Manuscript Trials and Cases, volume 1

A Treatise on the Parties to Actions, the Forms of Actions, and on Pleading, with Second and Third Volumes, Containing Precedents of Pleadings, volume 1

A Treatise on the Criminal Law of the United States: Comprising a Digest of the Penal Statutes of the General Government, and of Massachusetts, New York, Pennsylvania and Virginia; with the Decisions on Cases Arising Upon Those Statutes, and a General View of the Criminal Jurisprudence of the Common and Civil Law

A Collection of All Such Acts of the General Assembly of Virginia, of a Public and Permanent Nature, as are Now in Force: to Which are Prefixed the Declaration of Rights, and Constitution, or Form of Government, copy 3

Commentaries on the Laws of Virginia: Comprising the Substance of a Course of Lectures Delivered to the Winchester Law School, volume 1 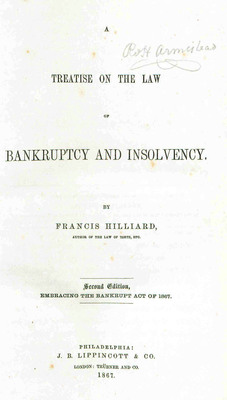