The Different names of Governments with their implications.

A Treatise of Practical Surveying: Which is Demonstrated From its First Principles Wherein Every Thing That is Useful and Curious in that Art, is Fully Considered and Explained 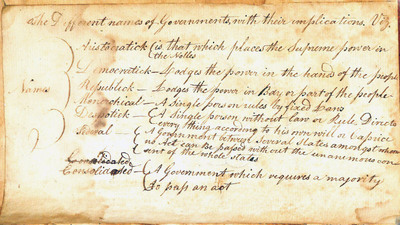 The Different names of Governments with their implications. Viz.

Aristocratick: is that which places the Supreme power in the Nolles

Democratick: Lodges the power in the hands of the people

Republick: Lodges the power in Bdy or part of the people.

Despotick: A Single person without law or Rule Directs every thing according to his own will or Caprice

Federal: A Government between several states amongst whom no Act can be passed without the unanimous convent of the whole states

Consolidated: A Government which requires a majority to pass an act