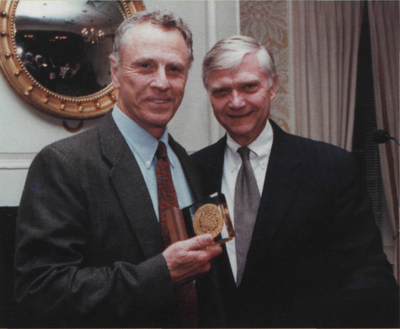 Civil rights attorney Morris Dees, Co-founder of the Southern Poverty Law Center; was recently awarded the Marshall-Wythe Medallion. The Marshall-Wythe Medallion is an annual award to a distinguished member of the legal community. Our law school faculty select the recipient each year making sure to rotate the nominees through three categories: judges, law professors, and practicing attorneys. Justice Breyer was the 1999-2000 recipient of the Medallion.

Morris Dees' s visit to the law school to receive the medallion.was low key; there were no formal speeches or receptions. Instead, after having lunch with faculty _ and administration, Mr. Dees met with student members of the American Constitutional Society to answer questions about his work. Recently elected ACS president Tim Kollas introduced Mr. Dees. Tim (an Oregon native) commented that he had first learned of and begun admiring the civil rights' attorney when Mr. Dees successfully sued white supremacist Tom Metzger and the White Aryan Resistance group for their role in the death of a young black student in Portland, Oregon.

Morris Dees was born in 1936 in Shorter, Alabama and grew up the son of a cotton farmer. During his discussion with the students he described how he was born into a segregationist society, and didn't think much of it until he began practicing law and heard the stories of his African-American clients. He, and attorney Joe Levin, co-founded the Southern Poverty Law Center in 1971 with the goal of taking on pro bono cases for minorities and the poor to fight for desegregation in recreational facilities, reapportionment of the Alabama legislature, and to implement federal civil rights legislation such as the Civil Rights Act of 1964 and the Voting Rights Act of 1965. Their goal was to implement the major victories of the Civil Rights Movements. Besides desegregation, the SPLC has brought Cases against textile companies over brown lung disease, prison reform cases to stop the use of chain gangs and improve mental institutions, and has tried approximately 60 capital cases. (The SPLC used to have a project called Team Defense, teaching attorneys how to defend death penalty cases.)

Today, the Southern Poverty Law Center works on various projects. One of those projects is the Intelligence Project, tracking hate groups and militias throughout the nation and sharing that information with law enforcement authorities to help in the prosecution of hate crimes. Teaching Tolerance is their most recent endeavor. It's an educational program, creating classroom materials for teachers to teach tolerance and diversity. One of the videos created for the program won an Academy A ward. The project now has a tolerance.org website. The SPLC is also the site of the Civil Rights Memorial, honoring those who died during the Civil Rights Movement.