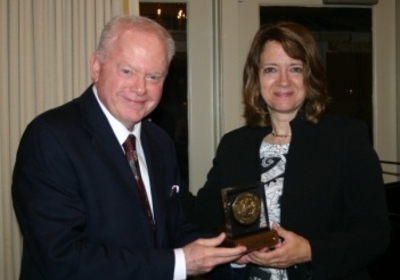 John H. Langbein, Sterling Professor of Law and Legal History at Yale Law School, received the 2008-09 Marshall-Wythe Medallion at a dinner in his honor at the College of William & Mary's Alumni House on April 2. The medallion, presented by Dean Lynda Butler, is the highest honor given by faculty at the Law School and recognizes outstanding leaders from the bench, bar, and academia.

Butler highlighted for the audience of faculty, staff, and students the key facets of Langbein's career that demonstrated his profound impact as a teacher, scholar, and law reformer.

He is known, she said, as "a superb teacher, making difficult and complex subjects come to life for the student." Vice Dean Eric Kades, she said, recalled taking Langbein's English Legal History course and described it as "fascinating" and his former professor as "unstumpable."

Langbein's book Prosecuting Crime in the Renaissance: England, Germany, France (1974) had its origins in his research for his Ph.D. and has the distinction, Butler said, of being "cited in a number of U.S. Supreme Court decisions." His later scholarship has garnered acclaim as well. In 2000, for example, the American Society for Legal History recognized his "pioneering work" with the Sutherland Prize, and his book The Origins of Adversary Criminal Trial (2003) was awarded the Coif Biennial Book Award in 2006. Butler noted that these were just a "few examples from his impressive scholarly record," which includes numerous articles and eight books.

Butler also noted that Langbein's contributions as a law reformer have had "a profound impact on American law." He has served the public good in numerous roles including, among others, Commissioner of the National Conference of Commissioners on Uniform State Laws and Reporter for the Uniform Law Commission.

He has served on the drafting committees for many acts, including the Uniform Principal and Income Act, the Uniform Trust Code and the Uniform Prudent Management of Institutional Funds Act. He was the principal drafter of the Uniform Prudent Investor Act, now adopted by most American states. Professor Langbein's work in the field of investment, trusts, pensions and probate law has been especially impressive, influencing the movement to unify the law of probate and non-probate transfers. After ERISA was passed, he led the effort to develop pension and employee benefit law as a scholarly field - no small feat!"

Before calling Langbein to the podium to receive the medallion, Butler echoed the words of Thomas Jefferson, who once wrote that he was "indebted" to his mentor George Wythe for "his influence on the course" of his life.

The Marshall-Wythe Medallion is named for John Marshall and George Wythe. Marshall was among the first law students at William & Mary and had a seminal impact on American history as Chief Justice of the Supreme Court. George Wythe, one of the leading statesmen of the Revolutionary Era, was William & Mary's - and the nation's - first professor of law.