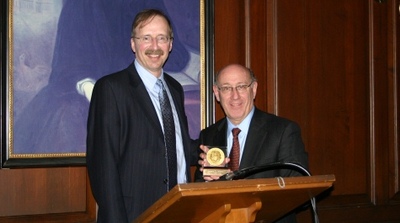 Kenneth Feinberg received the 2010-11 Marshall-Wythe Medallion at a dinner in his honor on March 16. The medallion, presented by Law School Dean Davison M. Douglas, is the highest honor conferred by the law faculty and recognizes members of the legal community who have demonstrated exceptional leadership and accomplishment.

“Ken Feinberg has lived an extraordinarily rich life in the law,” Douglas said. “He is arguably the premier dispute resolution expert and mediator in the United States, having served as the special master or chief administrator for many of the nation’s most significant disputes.”

Feinberg is best known for serving as the Special Master of the Federal September 11th Victim Compensation Fund of 2001, “a task of enormous delicacy,” Douglas said, “that Feinberg has described as trying to ‘fill the hole in a family’s life with money.’”

Douglas noted that Feinberg had written a book about his experiences administering the 9/11 Fund entitled, What Is Life Worth?, published in 2005 by Public Affairs Press. “As he describes in the book,” Douglas explained, “the experience made him realize that this was about far more than money for so many of the victims’ families – it was, for many, about the desire to be heard.”

Additionally, Feinberg served as Fund Administrator for the Hokie Spirit Memorial Fund following the tragic shootings at Virginia Tech. He is currently overseeing the Gulf Coast Claims Facility, which is administering $20 billion in claims from victims of the BP oil spill.

Finally, Douglas said, “Mr. Feinberg is no stranger to the academic community. He has taught as a lecturer at several law schools, including Georgetown, the University of Pennsylvania, New York University and the University of Virginia. I am hoping that we can add William & Mary to that list.”

Feinberg spent the earlier part of the day at William & Mary Law School, meeting with students and leading an Open Forum in which members of the community were able to ask him questions about his work.

The Marshall-Wythe Medallion is named for John Marshall and George Wythe. Marshall was among the first law students at William & Mary and had a seminal impact on American history as Chief Justice of the Supreme Court. George Wythe, one of the leading statesmen of the Revolutionary Era, was William & Mary's - and the nation's - first professor of law.