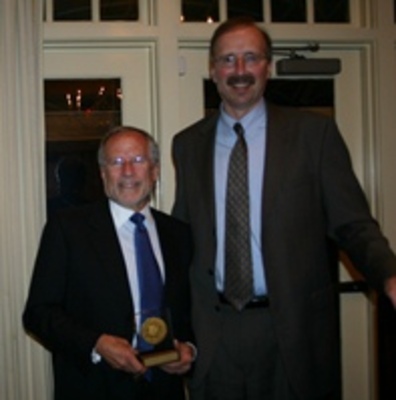 William & Mary Law School Dean Davison M. Douglas presented Professor Fred Schauer with the Marshall-Wythe Medallion at a dinner in his honor on October 4. The award is the highest honor conferred by the law school faculty, and recognizes outstanding achievement and leadership in the field of law.

Schauer began his academic career as an expert on the First Amendment, focusing on obscenity law, but quickly made a name for himself as a legal philosopher. He has served as vice-president of the American Society for Political and Legal Philosophy and chair of the Committee on Philosophy and Law of the American Philosophical Association. He was a founding co-editor of the prominent journal Legal Theory.

Douglas also noted that Schauer has been the subject of symposia at several law schools, has held a Guggenheim Fellowship, and is a fellow of the American Academy of Arts and Sciences. Schauer received Harvard’s Distinguished Teacher Award in 2004, although Douglas was quick to point out that William & Mary “acknowledged him first,” naming him Professor of the Year in 1979.

Schauer has written five books, most recently Thinking Like a Lawyer: A New Introduction to Legal Reasoning, published in 2009 by Harvard University Press. He is also the author of nearly 200 scholarly articles and essays, which have appeared in nearly every prestigious law journal in the country.

Calling the Marshall-Wythe Medallion an “unexpected, surprising and wonderful honor,” Schauer noted that “few of the previous winners have had as extensive connection with William & Mary as I have.

“I think a lot about my years here,” said Schauer. “This is a place where people think about ideas.”