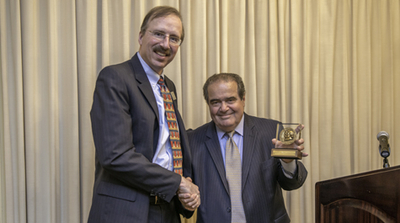 The law faculty celebrated Justice Scalia's contributions by conferring on him the 2012 Marshall-Wythe Medallion, the faculty's highest honor. Justice Scalia, at right, received the award from Dean Davison M. Douglas during a Sept. 10 dinner at the Alumni House.

On September 10 William & Mary Law School celebrated the contributions of U.S. Supreme Court Justice Antonin Scalia during a nearly a day-long visit by the Justice in which he taught a class, fielded questions from students and faculty, and received the Law School's Marshall-Wythe Medallion. The Medallion is the highest honor conferred by the law faculty in recognition of exceptional accomplishment in law.

"When the history of the Rehnquist and Roberts Courts are written, one of the most important chapters will be the one dealing with the jurisprudence of Justice Scalia," said Dean Davison M. Douglas in his remarks at the dinner at the Alumni House held in the Justice's honor. Noting Scalia's renown for his highly influential theory of constitutional interpretation known as textualism, Douglas added that he "writes ... with a spark that makes his opinion in a case frequently the most interesting one to read." Among the most notable Scalia passages the dean cited was the Justice's famous likening of the Court's Lemon Test (in Lamb's Chapel, 1993) to a "ghoul ... that repeatedly sits up in its grave and shuffles abroad, after being repeatedly killed and buried."

When "Professor" Scalia took his place behind the podium to teach Professor Allison Orr Larsen's administrative law class, he began by observing that the subject "was a hard course to teach, hard to learn ... administrative law is not for sissies." The class's topic - the removal of agency heads and officials - gave students a chance to hear the Justice's perspective on his separation of powers jurisprudence though his review of cases such as Morrison v. Olson and Edmond v. United States.

Pamela Kalinowski '14 confessed she had "butterflies" in her stomach at the prospect of having the Justice teach her class, but said his sense of humor and candor seemed to quickly put the class at ease. "I never thought I'd have an opportunity to hear a Supreme Court Justice teach one of my classes here," she said, "and I feel lucky to have that experience."

The Justice's visit also included lunch with students and faculty at the National Center for State Courts, which was followed by one of the day's two informal question and answer sessions. In reply to a question about advice he would give to lawyers just beginning their careers, the Justice recalled reading about the life of Chief Justice John Marshall. He marveled, he told the audience, as he learned about the many ways Marshall remained engaged in the life of his local community of Richmond, Va., throughout his career. He contrasted that to the modern pressure of the "billable hour" that makes some lawyers immerse themselves in their work at the expense of their personal lives. Scalia said he thought it was still possible for lawyers to find firms where they could work and still have time to be involved with family, church and community.

John Ferriss '15 was one of more than 100 faculty, staff and students who lined up in the Law School lobby for the chance to have the Justice sign a copy of his recently published book, with Bryan A. Garner, "Reading Law: The Interpretation of Legal Texts."

"As a new first-year law student, it was really inspiring as well as encouraging to see one of our nation's most important jurists come to the school," he said. "As for the book, I know it is vital to understand the philosophy behind legal interpretation, especially from the viewpoint of a celebrated judge. Getting his signature on his work is the icing on the proverbial cake!"

Second-year law student Heather Schmidt attended the dinner at which the dean presented Scalia with the Marshall-Wythe Medallion on behalf of the faculty. "I greatly enjoyed listening to Justice Scalia speak when he accepted the award," she said, "but the highlight of the evening was when I had the opportunity to shake his hand and thank him for his service to our nation as a Justice. I will never forget that moment."