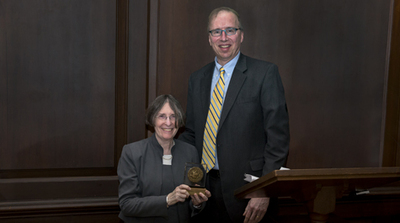 The Law School faculty celebrated Professor Roberta Romano's outstanding contributions as a scholar and as a mentor to other scholars at a dinner in her honor held at William & Mary's historic Wren Building.

Professor Roberta Romano of Yale Law School received the 2017-2018 Marshall-Wythe Medallion at a dinner in her honor on March 15 held at William & Mary's historic Wren Building. The medallion is the highest honor conferred by the William & Mary Law School faculty and recognizes those who have demonstrated exceptional accomplishment in law. Romano is the Sterling Professor of Law at Yale Law School, where she is director of the Center for the Study of Corporate Law.

To illustrate the esteem in which Romano is held by other scholars, Douglas shared with the audience excerpts of what William & Mary law faculty had to say about her stature and contributions.

One faculty member, Douglas said, wrote that Romano "has done truly path-breaking work in corporate law with sweeping policy implications. Perhaps her signal contribution was to raise serious doubts about Professor Carey's hypothesized "race to the bottom" among states. . . . It is no exaggeration to say that her writings on this critical topic have to a large extent disrupted and reshaped the debate on state competition for incorporation business."

Another faculty member, he said, hailed Romano as "one of her generation's leading voices in corporate and securities law" and described how she deftly combines empirical evidence and compelling arguments in numerous widely cited books and articles.

She is "one of the most consistently thoughtful and insightful scholars of corporate law today," wrote a third faculty member. "The role of jurisdictional competition and the market for law are some of the most central questions in the field, and it's safe to say that Professor Romano's work defines the scope of the debate in this area of law."

Douglas said an award named in part for George Wythe, Thomas Jefferson's mentor, seemed particularly fitting for Romano, who has mentored many young scholars throughout her decades-long career.

About the Marshall-Wythe Medallion

The Marshall-Wythe Medallion is named for John Marshall and George Wythe. Wythe, one of the leading statesmen of the Revolutionary Era, was William & Mary's-and the nation's-first professor of law. Marshall was among Wythe's first students at William & Mary and went on to have a seminal impact on American history as the fourth chief justice of the United States.