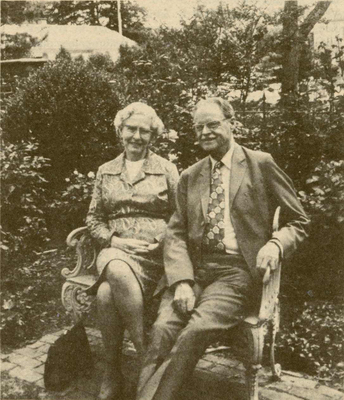 Sir Norman Anderson, director of the Institute for Advanced Legal Studies at the University of London, and Lady Anderson, are pictured in the rose garden of the Abby Aldrich Rockefeller Folk Art Museum during their stay in Williamsburg this weekend. Sir Norman received the Marshall-Wythe Law Medallion in ceremonies marking the Virginia State Bar and the W&M Student Bar Association bicentennial observance of Law Day, May 1.

Leon Jaworski, former special Watergate prosecutor and past president of the American Bar Association, and Professor Sir Norman Anderson, director of the Institute of Advanced Legal Studies at the University of London, have been selected to receive the Marshall-Wythe Medallion.

The medallion is awarded periodically by the faculty of the law school to persons who have distinguished themselves in the field of law.

Jaworski will receive his award at the College's 283rd Charter Day program, Saturday, Feb. 7. Principal speaker at the ceremonies will be Sir Peter Ramsbotham, British Ambassador to the United States.

Anderson will be presented his medallion at the annual Law Day program, which the law school will sponsor in early May. The date has yet to be announced.

Jaworski was born in Waco, Texas, and holds law degrees from Baylor University and George Washington Universities. He is currently a senior partner with the Houston law firm of Fullbright, Crooker and Jaworski.

During his distinguished career in law he has been president of the Texas State Bar, the American Law Institute, the American College of Trial Lawyers, the American Bar and the Houston Bar. He has served on presidential commissions on law enforcement and administration of justice, and the causes and prevention of violence. He served as a colonel in the Army during World War II and was a trial judge for war crimes cases.

Jaworski was appointed as special prosecutor in the Watergate trials in November, 1973, succeeding Archibald Cox. His insistent efforts to gain access to tapes and documents led to a running legal battle with White House lawyers and culminated in arguments before the Supreme Court of the United States which were resolved in his favor. During his 11 months as a special prosecutor (he resigned Oct. 12, 1974), Jaworski and his aides produced indictments of, or guilty pleas from 14 major officials of the Nixon administration and the Committee to Re-elect the President.

He has also prosecuted a dozen corporations and 17 of their executives for illegal campaign contributions.

Professor Anderson, an authority on Islam and African Law, Arabic and Islamics, has published widely both in the fields of law and theology. He has been professor of Oriental laws from 1953 and director of the Institute of Advanced Legal Studies since 1959. He is a member of the Colonial Office Native Law Advisory Panel, the Council of Britain, and the Institute of International and Comparative Law and Justice. He is also vice president of the International African Law Association.

Professor Anderson received an honorary D.D. from St. Andrew's College in 1974 and was included on Queen Elizabeth's latest honors list for his work as chief legal advisor for the Church of England. He has been a visiting professor at several U.S. universities, including Princeton, New York Law School, and Harvard Law School.

He will be in the United States in May as a member of a British bar group here to attend bicentennial functions at the invitation of the American Bar Association.