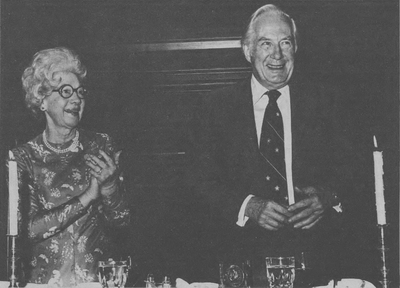 At the Marshall-Wythe School of Law faculty dinner on the evening of Law Day (April 28, 1979), Chief Justice Burger received the Law Alumni Medallion. With the Chief Justice is Mrs. Burger.

Chief Justice of the United States Supreme Court Warren E. Burger will join hundreds of other judges, lawyers, legislators and other guests Saturday, April 28, in placing the cornerstone of the new building for the Marshall-Wythe School of Law.

The ceremony to lay the cornerstone of the new building, which is scheduled to be completed around the first of next year, will be one of the highlights of a full day of activities commemorating Law Day 1979. The events also commemorate the 200th anniversary of the founding of the nation's first chair of law at the College in 1779.

Chief Justice Burger will deliver , remarks at the cornerstone-laying ceremony, as will Lawrence I'Anson, Chief Justice of the Virginia Supreme Court and a 1928 graduate. The ceremony is scheduled to begin at 3:30 p.m., and a reception at the site will follow.

During the law faculty dinner scheduled for Saturday night, Chief Justice Burger will receive the Marshall-Wythe Medallion, the most prestigious honor bestowed by the Law School faculty. Burger, who was appointed chief justice in 1969 and received an honorary degree from the College in 1973, has been a frequent visitor to the Williamsburg area. He was instrumental in helping to support the creation of the new National Center for State Courts, which is located on land adjacent to the new Law School building.

Dean William B. Spong, Jr., who recently completed a five-city tour of alumni meetings across the state, has invited all alumni of the Law School to attend both the Law Day program and the ceremony to lay the cornerstone. Members of the General Assembly and government officials have also been invited.

The new Law School building, which was a part of the bond referendum package approved by voters in November 1977, will include a larger library and one of the most technically advanced moot courtrooms in the nation.