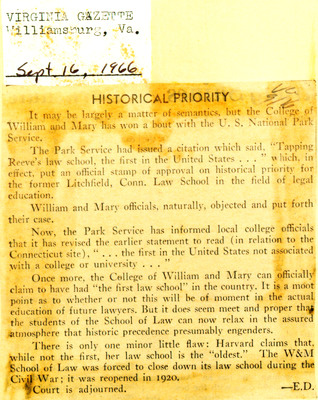 It may be largely a matter of semantics, but the College of William and Mary has won a bout with the U.S. National Park Service.

The Park Service had issued a citation which said, "Tapping Reeve's law school, the first in the United States . . ." which, in effect, put an official stamp of approval on historical priority for the former Litchfield, Conn. Law School in the field of legal education.

William and Mary officials, naturally, objected and put forth their case.

Now, the Park Service has informed local college officials that it has revised the earlier statement to read (in relation to the Connecticut site), ". . . the first in the United States not associated with a college or university . . ."

Once more, the College of William and Mary can officially claim to have had "the first law school" in the country. It is a moot point as to whether or not this will be of moment in the actual education of future lawyers. But it does seem meet and proper that the students of the School of Law can now relax in the assured atmosphere that historic precedence presumably engenders.

There is only one minor little flaw: Harvard claims that, while not the first, her law school is the "oldest." The W&M School of Law was forced to close down its law school during the Civil War; it reopened in 1920.