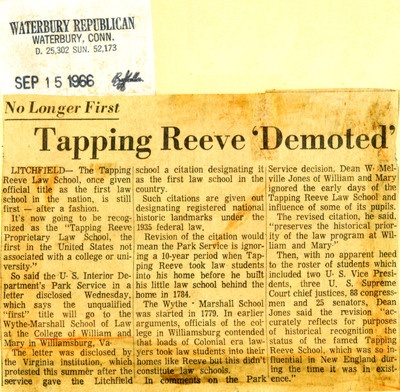 LITCHFIELD -- The Tapping Reeve Law School, once given official title as the first law school in the nation, is still first -- after a fashion.

It's now going to be recognized as the "Tapping Reeve Proprietary Law School, the first in the United States not associated with a college or university."

So said the U.S. Interior Department's Park Service in a letter disclosed Wednesday which says the unqualified "first" title will go to the Wythe-Marshall School of Law at the College of William and Mary in Williamsburg, Va.

The letter was disclosed by the Virginia institution, which protested this summer after the service gave the Litchfield school a citation designating it as the first law school in the country.

Such citations are given out designating registered national historic landmarks under the 1935 federal law.

Revision of the citation would mean the Park Service is ignoring a 10-year period when Tapping Reeve took law students into his home before he built his little law school behind the home in 1784.

The Wythe-Marshall School was started in 1779. In earlier arguments, officials of the college in Williamsburg contended that loads of Colonial era lawyers took law students into their homes like Reeve but this didn't constitute law schools.

In comments on the Park Service decision, Dean W. Melville Jones of William and Mary ignored the early days of the Tapping Reeve Law School and influence of some of its pupils.

The revised citation, he said, "preserves the historical priority of the law program at William and Mary."

Then, with no apparent heed to the roster of students which included two U.S. Vice Presidents, three U.S. Supreme Court chief justices, 88 congressmen and 25 senators, Dean Jones said the revision "accurately reflects for purposes of historical recognition the status of the famed Tapping Reeve School, which was so influential in New England during the time it was in existence."