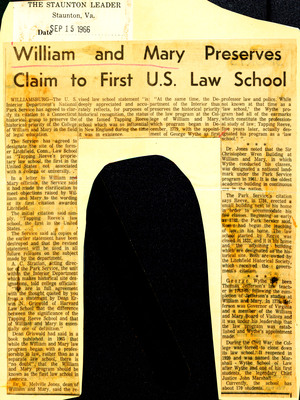 WILLIAMSBURG -- The U.S. Interior Department's National Park Service has agreed to clarify its citation to a Connecticut historical group to preserve the historical priority of the College of William and Mary in the field of legal education.

The Service has agreed to designate the site of the former Litchfield, Conn., Law School as "Tapping Reeve's proprietary law school, the first in the United States not associated with a college or university. ."

In a letter to William and Mary officials, the Service said it had made the clarification to meet objections raised by William and Mary to the wording of its first citation awarded Litchfield.

The Service said all copies of the earlier statement have been destroyed and that the revised statement will be used in all future releases on the subject made by the department.

"We are in full agreement with the thought quoted by you from a statement by Dean Erwin N. Griswold of Harvard Law School that the difference between the significance of the Tapping Reeve School and that of William and Mary is essentially one of definition."

Dr. W. Melville Jones, dean of William and Mary, said the revised law school statement "is deeply appreciated and accurately reflects, for purposes of historical recognition, the status of the famed Tapping Reeve school which was so influential in New England during the time it was in existence.

"At the same time, the Department of the Interior thus preserves the historical priority of the law program at the College of William and Mary, which program began in December 1779, with the appointment of George Wythe as first professor [of] law and police. While not known at that time as a 'law school,' the Wythe program had all of the earmarks which constitute the professional study of law; Tapping Reeve, five years later, actually designated his program as a 'law school.'"

Dr. Jones noted that the Sir Christopher Wren Building at William and Mary, in which Wythe conducted his classes, was designated a national landmark under the Park Service program in 1961. It is the oldest academic building in continuous use in the nation.

The Park Service's citation says Reeve, in 1784, erected a small building next to his home in order to accommodate his law classes. Beginning as early as 1782, the Park Service said, Reeve had begun the teaching of law in his home. The law school started by Reeve was closed in 1833, and it is his home and the adjoining building which are designated as the historical site. Both are owned by the Litchfield Historical Society, which received the government's citation.

George Wythe had been Thomas Jefferson's law teacher in 1763-65, following the completion of Jefferson's studies at William and Mary. In 1779, Jefferson was Governor of Virginia and a member of the William and Mary Board of Visitors and it was under his leadership that the law program was established and Wythe's appointment made.

During the Civil War, the College was forced to close down its law school. It reopened in 1920 and was named the Marshall-Wythe School of Law after Wythe and one of his first students, the legendary Chief Justice John Marshall.

Currently, the school has about 170 students.