Massachusetts Claim Questioned: The First Mistake Was Thinking They Could Have Been The First 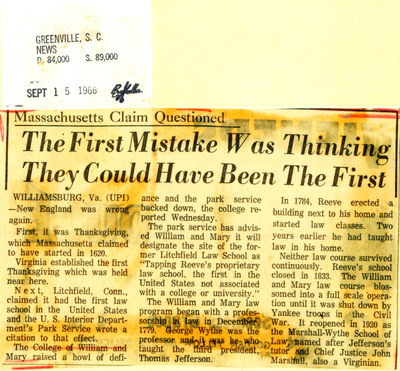 First, it was Thanksgiving, which Massachusetts claimed to have started in 1620.

Virginia established the first Thanksgiving which was held near here.

Next, Litchfield, Conn., claimed it had the first law school in the United States and the U.S. Interior Department's Park Service wrote a citation to that effect.

The College of William and Mary raised a howl of defiance and the park service backed down, the college reported Wednesday.

The park service has advised William and Mary it will designate the site of the former Litchfield Law School as "Tapping Reeve's proprietary law school, the first in the United States not associated with a college or university."

The William and Mary law program began with a professorship in law in December, 1779. George Wythe was the professor and it was he who taught the third president, Thomas Jefferson.

In 1784, Reeve erected a building next to his home and started law classes. Two years earlier he had taught law in his home.

Neither law course survived continuously. Reeve's school closed in 1833. The William and Mary law course blossomed into a full scale operation until it was shut down by Yankee troops in the Civil War. It reopened in 1920 as the Marshall-Wythe School of Law, named after Jefferson's tutor and Chief Justice John Marshall, also a Virginian.