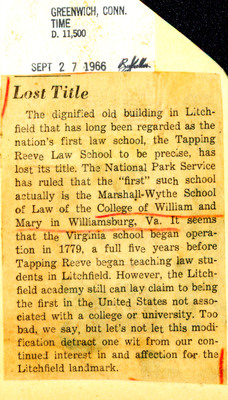 The dignified old building in Litchfield that has long been regarded as the nation's first law school, the Tapping Reeve Law School to be precise, has lost its title. The National Park Service has ruled that the "first" such school actually is the Marshall-Wythe School of Law of the College of William and Mary in Williamsburg, Va. It seems that the Virginia school began operation in 1779, a full five years before Tapping Reeve began teaching law students in Litchfield. However, the Litchfield academy still can lay claim to being the first in the United States not associated with a college or university. Too bad, we say, but let's not let this modification detract one wit from our continued interest in and affection for the Litchfield landmark.