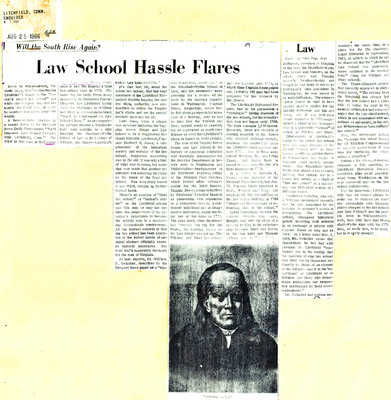 Down in Williamsburg, Va. these days, they're challenging Litchfield's claim to the "nation's oldest law school" and while the tempest may not rekindle the Civil War, it could be another shot heard round the world.

A three-column headline in a recent issue of the Newport News Daily Press cried, "W&M Disputes Law School Priority With Litchfield, Conn." The W&M in this case is the College of William and Mary, which says it had the country's first law school back in 1779. The same day the Daily Press story appeared, the Richmond Times-Dispatch had Litchfield laying down the challenge to William and Mary in a two-column head: "W&M Is Challenged On Law School Claim." An accompanying picture showed a Williamsburg man pointing to a sign marking the Marshall-Wythe School of Law of the College of William and Mary -- America's Oldest Law School -- 1779."

It's that last bit, about the oldest law school, that has kept members of the Litchfield Historical Society hopping the last few days, gathering new ammunition to refute the Virginian's claim and set the record straight once and for all.

Last June, when a plaque was unveiled declaring the Tapping Reeve House and Law School to be a Registered National Historic Landmark, Captain Herbert S. Jones, a vice president of the historical society and curator of the law school, suggested something was in the air. It was only a hint of what was to come, but mention was made that another institution was asserting its claim as the home of the first law school.Now everybody knows it was W&M, kicking up its historical heels.

There's no mention of "first law school" or "nation's oldest" on the Litchfield plaque and this may or may not reflect the Department of the Interior's reluctance to become the middle man in a modern-day North-South controversy. All the marker records is that the law school has been admitted to the select circle of national shrines officially known as historic landmarks. But even that's apparently too much for the men of Virginia.

At last reports, Dr. William F. Swindler, described by the Newport News paper as a "history-conscious professor" at the Marshall-Wythe School of Law, and his associates were pressing for a review of the facts by the Interior Department in Washington. Captain Jones, meanwhile, asked how he felt about prospects for some kind of a hearing, said he had no idea how the William and Mary appeal would be greeted, but he expressed as much confidence as ever that Litchfield's claim is based on solid ground.

The role of the Tapping Reeve House and Law School in the history of American education was carefully documented for the Interior Department in letters sent to Washington and Philadelphia -- headquarters of the Northeast Regional Office of the National Park Service, which looked after arrangements for the local honors. Tapping Reeve, a man described by Professor Swindler himself as possessing wide reputation as a compet[e]nt lawyer, a cultivated individual and an imaginative instructor, began teaching law at his home in 1774. Ten year later, when the school had become too big for the house, the building known as the Law School was put up. the William and Mary law school was not founded until 1779, by which time Captain Jones points out, probably 100 men had been prepared for law careers by Mr. Reeve.

The Litchfield Historical Society has in its possession a "catalogue" listing students of the law school, but the compilation was not begun until 1798. The book contains 1,012 names. However, there are records of certain students of Mr. Reeve who attained national stature, students who learned law from the Litchfield attorney well before 1779. Two of these were Oliver Wolcott, Jr., and Uriah Tracy. And Aaron Burr is known to have been Mr. Reeve's first student -- in 1774.

In a letter to Jackson E. Price, acting director of the National Park Service, last Jan. 10, Captain Jones referred to Burr, Wolcott and Tracy and emphasized that the building of the law school building in 1784 "should not be construed as the founding date of the school."

Local historians, viewing the current dispute this week, thought they saw the ghost of a age-old rivalry in the relation- ship between Burr and Reeve on the one hand and Thomas Jefferson, governor of Virginia at the time the Marshall-Wythe Law School was founded, on the other. Burr was Tapping Reeve's brother-in-law and though he was later to serve as Jefferson's vice president in Washington, he was known to be anti-Jefferson. The conservative Reeve is said to have shared Burr's dislike for the liberal Jefferson and his actions, and it was Jefferson whose initiative in 1779 established a chair of law (comparable to a university "school" of today) at William and Mary.

Discounters of Litchfield's claim to the oldest law school title say many lawyers of the period "talked law" in their homes or offices, and that Reeve of Connecticut and Wythe of Virginia were merely among them. The Virginians insist Wythe was ahead of Reeves and, anyway, that talking law in a house and setting up a chair of "law and police" at a university are historical events of a different breed.

Professor Swindler, who told a Virginia newspaper recently that he was surprised by the Interior department's action in recognizing the Litchfield school, discussed historical points involving both schools in an exchange of letters with Captain Jones as long ago as 1964. In a letter dated Nov. 9, 1964, Mr. Swindler wrote that discussion he had had with persons in Litchfield "confirmed me in the feeling that the question of what law school was first can be discussed rationally be those of us closest to the subject -- and it is the 'lay partisans' of Litchfield or of William and Mary who sometimes embarrass our respective institutions by their overzealousness."

Dr. Swindler had written essentially the same thing in a piece for the The Quarterly Legal Historian in September, 1963, an article in which he also observed that the "Litchfield Law School was undeniably more national in its student body" (than the William and Mary school).

The Times-Dispatch article that recently appeared in Richmond noted, "The college here (in Virginia) has always felt that its law school had a clear title to being the first in the country although it had acknowledged that the Litchfield school, which is not associated with any college or university, is the oldest independent or 'proprietary' law school."

Now, the newspaper added, the "college has asked Downing (A Virginia Congressman) to suggest procedures it can take for rectifying the whole unhappy situation."

Unhappy for whom, of course, remains a fair question, as Litchfield Historical Society members also await possible word from Washington on the next move -- if any -- in the law school controversy.

For the time being, Litchfield still has its bronze plaque to point out to visitors (at least one automobile with Virginia plates stopped at the law school just last Friday!) and the people down in Williamsburg -- well, they still have that Marshall-Wythe sign with its 1779 date, an early date, to be sure, but is it early enough?