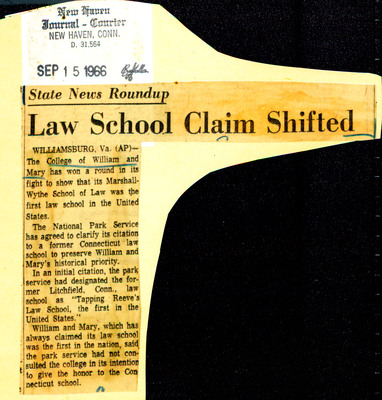 WILLIAMSBURG, Va. (AP)-- The College of William and Mary has won a round in its fight to show that its Marshall-Wythe School of Law was the first law school in the United States.

The National Park Service has agreed to clarify its citation to a former Connecticut law school to preserve William and Mary's historical priority.

In an initial citation, the park service had designated the former Litchfield, Conn., law school as "Tapping Reeve's Law School, the first in the United States."

William and Mary, which has always claimed its law school was the first in the nation, said the park service had not consulted the college in its intention to give the honor to the Connecticut school.