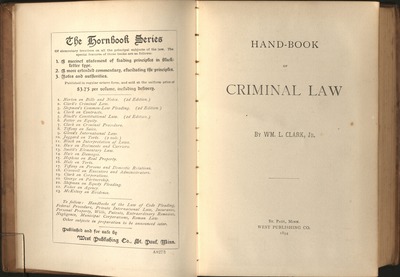 William Lawrence Clark (1863-1918) published a number of hornbooks covering a wide variety of practice areas. His Hand-Book of Criminal Law (1894) was written for both students and practitioners. It covers the general principles of criminal law, specifically focusing on the common law rather than specific state laws and variations. Clark organized the crimes by their nature, and discussed "kindred crimes" in order rather than organizing crimes alphabetically. For each crime, Clark provides definitions, principles, and elements. Then, he gives discussions and illustrations in subsidiary text with application in case law included within the notes. This work was published in West Publishing's Hornbook series, which contains several of Clark's works in addition to others included in the Wolf Law Library's Harris Collection.