Dicey on Parties to Action 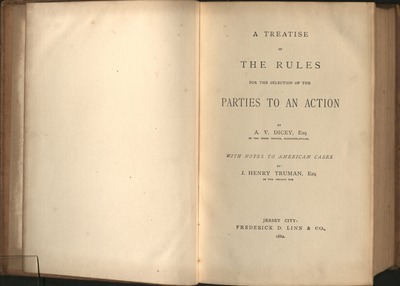 Dicey, A. V. A Treatise on the Rules for the Selection of the Parties to an Action. Jersey City: Frederick D. Linn & Co., 1882.

Albert Venn Dicey (1835-1922) was a British jurist and constitutional theorist. He was appointed to the Vinerian Chair of English Law at Oxford in 1882 and was appointed Queen's Counsel shortly thereafter, in 1890. A Treatise on the Rules for the Selection of the Parties to Action (1870) outlines major rules relevant to practitioners in that area of law. Further, each rule is accompanied by concise case law and exceptions to the general principles.