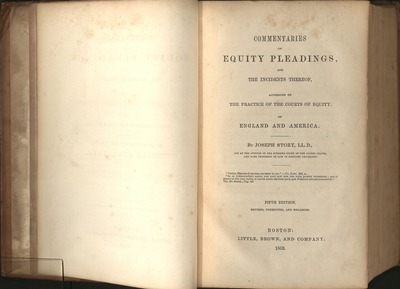 Story, Joseph. Commentaries on Equity Pleadings, and the Incidents Thereof, According to the Practice of the Courts of Equity, of England and America. 5th ed., revised, corrected, and enlarged. Boston: Little, Brown, and Company, 1852.

Joseph Story (1779-1845) was the youngest justice ever appointed to the United States Supreme Court, serving from 1811 to 1845. He was a prolific legal writer and well-known scholar, and his works influenced the writings of many other legal authors -- several of whom can be found in the Wolf Law Library's Harris Collection. Story's Commentaries on Equity Pleadings (1838) organizes the leading principles of equity jurisprudence, connecting those principles to the relevant pleadings and forms. He outlines the applications of equity rules, as well as their limitations, in his explanations. The treatise covers topics relating to parties, bills, and demurrer.