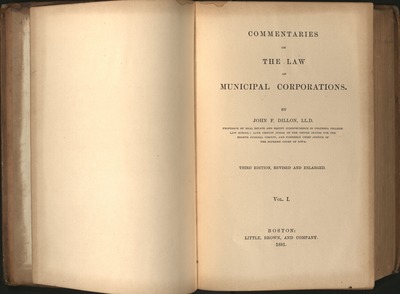 John Forrest Dillon (1831-1914) was a medical doctor and lawyer. He practiced in Iowa where he held a state judgeship before being appointed to the United States Circuit Court, now the Eighth Circuit. He gives his name to Dillon's Rule, the theory of state preeminence over local governments. His Municipal Corporations (1872) was one of the earliest surveys of municipal law. The treatise explores Dillon's Rule and the power of the states to delegate authorities to their municipalities. The United States Supreme Court has cited to Municipal Corporations and has adopted Dillon's Rule with regards to conflicts between states and municipalities.