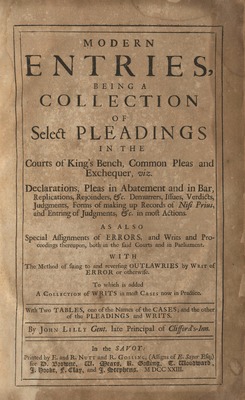 This copy of Modern Entries was printed by Elizabeth Nutt and her son Richard. She likely sold newspapers and pamphlets before her marriage to John Nutt in 1692. Several years later, John Nutt set up a print shop in the Savoy in London and soon acquired a patent to print law books. Following her husband's death in 1716, Elizabeth began printing under her own name, frequently in partnership with her children. Nutt and members of her family were arrested and prosecuted for libel for printing and selling opposition newspapers during Robert Walpole's ascendancy. When she died in 1746, she was the matriarch of a large-scale London print operation.