Petition of the Widow of Hon. I. Washburn to the Managers of the American Bible Society 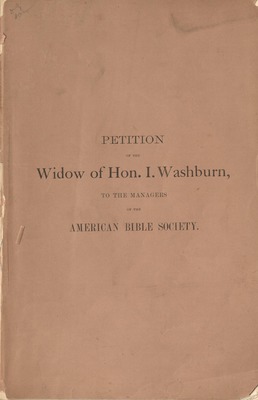 Petition of the Widow of Hon. I. Washburn to the Managers of the American Bible Society. New York: Francis & Loutrel, 1870.

This is the petition of Elizabeth Bancroft Cheever Washburn regarding her husband's will. Born in 1812 in Massachusetts to the abolitionist Cheever family, she married Ichabod Washburn, a wealthy metal goods manufacturer and founder of Washburn University in 1855. He died following a stroke in 1868, just days after having a new will drafted, but before signing it. In both wills he had left a legacy to five organizations, and Elizabeth sought a settlement with them based on the second will. One legatee, the American Bible Society, declined the settlement. The case was of national interest and newspapers across the country reported on it. An arbitration board settled the case in 1871.