The Tragedy of the Negro in America 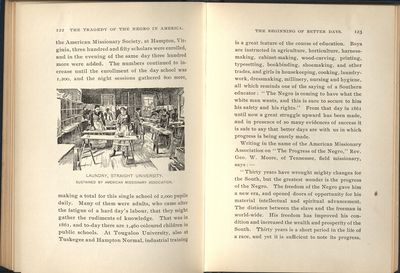 Born into slavery and orphaned, Stanford was taken in by Quakers following the end of the Civil War. He became a minister and traveled internationally, advocating for racial justice where he went. While living in Birmingham, England, he encountered Ida B. Wells, an American feminist, anti-lynching activist, and a founder of the NAACP. Stanford soon made plans to return to the U.S. to investigate lynchings and the success of reconstruction. This book is the result of his investigation and is by no means an optimistic picture. It includes an entire chapter on lynching. This illustration shows a school in Hampton, VA, where black women learned "housekeeping, cooking, laundrywork, dressmaking, millinery, nursing, and hygiene.”