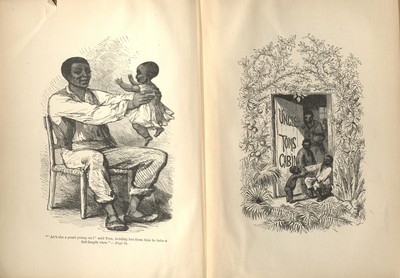 This is an 1897 edition of Uncle Tom's Cabin, by Harriet Beecher Stowe. Born in Connecticut, she grew up among abolitionists. Stowe began writing Uncle Tom's Cabin, partly in response to the passage of the Fugitive Slave Act in 1850. It was one of the best-selling novels of the 19th century, illustrating slavery in a dramatized way that drew Americans' attention at the time, and continues to spark controversy today. Stowe also wrote on the women's suffrage movement, but often held conflicting views on the role of women in society when compared to her contemporaries.