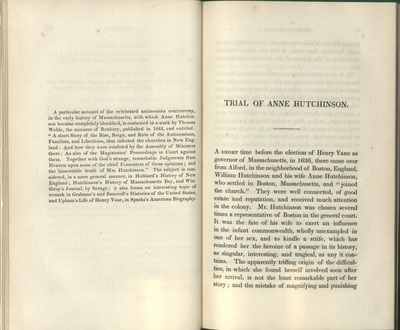 This is a modern account of the trial of Anne Hutchinson. Hutchinson was a midwife and healer, as well as a spiritual advisor in the Boston colony. She became embroiled in the Antinomian controversy, a religious schism that threatened to tear the colony apart. Hutchinson was arrested and charged with "transducing the ministers" and heresy. She was convicted and her family was banished from the colony in 1638. She and six members of her family were killed during Kieft's War several years later. Anne Hutchinson was only the first of several women tried for similar crimes in a short period of time.