The Clerk’s Instructor in the Ecclesiastical Courts 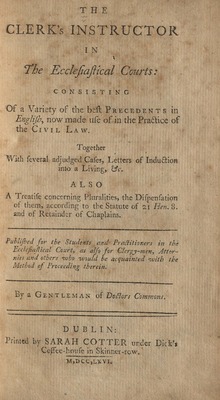 This book was printed and published by Sarah Cotter (d. 1792). Her shop was located in Dublin along Skinner-Row. Notably, it was located under Dick's Coffee-house, one of a few coffeehouses significant to the Irish Enlightment. Close to the Tholsel, many of the coffeehouse patrons were lawyers. Joseph Cotter, who was either her husband or brother, owned the shop, and Sarah took over operations after his death in 1751. She became a prominent law bookseller and publisher in her own right and was listed as the Dublin agent on some London imprints. In 1768, Sarah Cotter married Joseph Stringer, and her former apprentice Charles Ingham succeed her in ownership of the business. She continued to publish books occasionally.