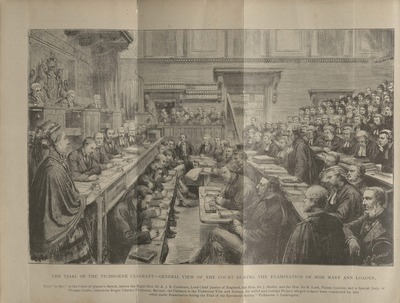 The frontispieces of these two volumes illustrate the trial of the so-called Tichborne Claimant, a famous episode of the 1870s. In 1854, Roger Tichborne, heir to an English baronetcy, was on a ship that sank. His mother, Lady Tichborne, received a letter stating that he was living in Australia under a different name. She then funded an unknown man’s travel to across the globe and became convinced that he was her son. He lived as a member of her family for several years, and following her death, attempted to claim the baronetcy in Tichborne v. Lushington. Instead, he was revealed to be Arthur Orton, subsequently tried for perjury, and served 10 years in prison.