A Full and Complete History of the Great Beattie Murder Case 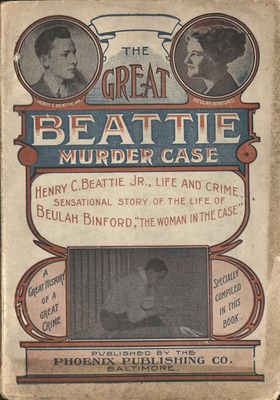 The portrait on display here is of Louise Owen Beattie, who was murdered by her husband Henry Clay Beattie. They were married in 1910 and had an infant son 1911. Around the time of the birth of their son, Henry Beattie reconnected with a former girlfriend. He procured a shotgun, and then on July 18, 1911, invited Louise on a drive. When they returned several hours later, Louise was dead. Beattie claimed that they were attacked by a highwayman, but his story did not stand up to police investigation. His trial was sensational, but Louise herself was mostly ignored, as is evident in this paperback. The case is most well remembered today through the folk song, "Henry Clay Beattie" recorded by Kelly Harrell in 1927.