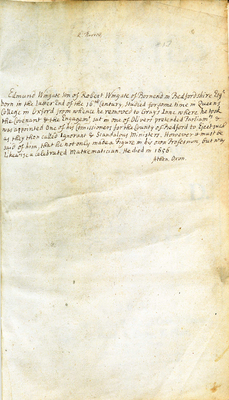 Edmund Wingate son of Robert Wingate of Bornend in Bedfordshifre Esqs born in the Latter End of the 16th Century, studied for some time in Queen's College in Oxford from whence he removed to Gray's Inne where he took the Covenant & the Engagemt sat in one of Olivers pretended Parliamts, & was appointed One of his Commisioners for the County of Beford to Eject such as they then called Ignorant & Scandalous Ministers. However it must be said of him, that he not only made a figure in his own Profession, but was likewise a celebrated Mathematician. He died in 1656.