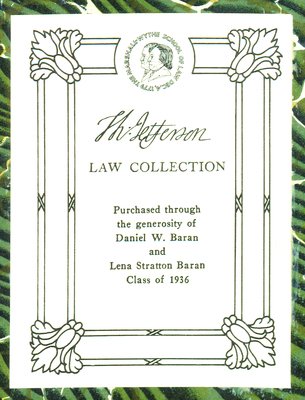 A Collection of the Statutes Made in the Reigns of King Charles the I. and King Charles II. [1625-1667]: with the Abridgement of Such as Stand Repealed or Expired, Continued after the Method of Mr. Pulton. With notes of References, One to the Other, as They Now Stand Altered, Enlarged or Explained. To which also are added, the Titles of all the Statutes and Private Acts of Parliament Passed by the Said Majesties, untill this present year, [1667]

The Statute-Law Common-Plac'd, or, A Second General Table to the Statutes:

Reports of Divers Resolutions in Law: Arising Upon Cases in the Court of Wards, and Other Courts at Westminster, in the Reigns of the Late Kings, King James and King Charles. [1608-1629]

The Reports of Sr. Creswell Levinz, Knt.: ... in French and English. Containing cases heard and Determin'd in the Court of King's Bench, During the Time that Sir Robert Foster, Sir Robert Hyde, and Sir John Kelyng were Chief Justices there [1660-1696], volumes 1-2, 3

Reports of Cases in Law and Equity: From 1670 to 1706. With Tables of the Names of the Cases and Principle Matters, volumes 1-2

Modern Cases Argued and Adjudged in the Court of King's Bench at Westminster : in the Reign of Her late Majesty Q. Anne, in the Time when Sir John Holt Sat Chief-Justice there [1702-03]

The Reports of Several Cases Argued and Adjudged in the Court of King's Bench at Westminster: With Some Special Cases in the Courts of Chancery, Common Pleas and Exchequer. In the I, II, III, IV, and V years of His present Majesty King George II [1727-1732]

Reports of Cases Argued and Determined in the Court of King's Bench: in the Nineteenth, Twentieth, and Twenty-First Years of the Reign of George III. [1778-1781]

Reports and Cases Taken in the Third, Fourth, Fifth, Sixth, and Seventh Years of the Late King Charles

Reports of Sevral Special Cases Argued and Resolved in the Court of Common Pleas: in the XVI, XVII, XVIII, and XIXth years of King Charles II

A Law-Dictionary and Glossary: Interpreting such Difficult and Obscure Words and Terms, as are Found Either in our Common or Statute, Ancient or Modern, Laws

Maxims of Equity: Collected From and Proved by Cases, out of the Books of the Best Authority in the High Court of Chancery

A Systematical View of the Laws of England: As Treated of in a Course of Vinerian Lectures, Read at Oxford, During a Series of Years, Commencing in Michaelmas Term, 1777, volumes 1-2

The Practical Conveyancer: in Two Parts

The Law of Charitable Uses: Revised and Much Enlarged; with Many Cases in Law Both Antient and Modern

The Practical Register, or, A General Abridgement of the Law, 2nd edition, volumes 1-2

A Supplement to Lilly's Practical Register, or, General Abridgment of the Law

The Attorney's Practice in the Court of King's Bench: or, An Introduction to the Knowledge of the Practice of that Court, as it Now Stands Under the Regulation of Several Late Acts of Parliament, Rules and Determinations of the Said Court, 4th edition, volumes 1-2

The Office and Authority of a Justice of Peace: Collected out of all the Books, Whether of Common or Statute Law, Hitherto Written on that Subject, 8th edition

Officium Vicecomitum = The Office and Authority of Sheriffs: Gathered out of the Statutes, and Books of the Common Laws of This Kingdom

An Enquiry into the Foundation and History of the Law of Nations in Europe: from the Time of the Greeks and Romans, to the Age of Grotius, volumes 1-2

Thomas Jefferson's Library: A Catalog with the Entries in His Own Order