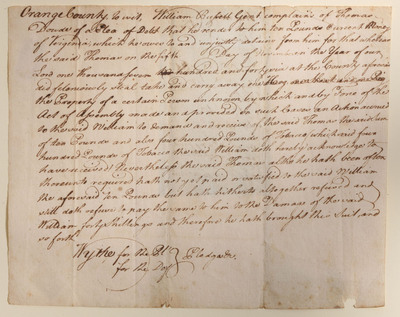 Orange County, to wit, William Russell Gent. complains of Thomas Dowde of a Plea of Debt that he render to him ten pounds Current Money of Virginia, which he owes to and unjustly detains from him for that whereas the said Thomas on the fifth Day of November the Year of our Lord one thousand seven hundred and forty six at the County aforesaid did feloniously steal take and carry away one hog, the Property of a certain Person unknown by which and by Force of the Act of Assembly made and provided in such Cases an Action accrued to the said William to demand and receive of the said Thomas the said Sum of ten Pounds and also four hundred Pounds of Tobacco which said four hundred Pounds of Tobacco the said William doth hereby acknowledge to have received Nevertheless the said Thomas although he hath been often thereunto required hath not yet paid or satisfied so the said William the aforesaid ten Pounds but hath hitherto altogether refused and still doth refuse to pay the same to him to the Damage of the said William forty shillings and therefore he hath brought this Suit, and so forth.

Wythe for the Plaintiff for the Defense