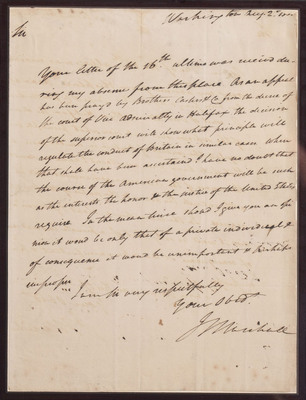 Washington Aug. 2, 1809 Sir Your letter of the 16th ultimo was received du- ring my absence from this place. As an appeal has been prayed by Brothers Carters & Co. from the decree of the court of Vice Admiralty in Halifax, the decision of the superior court will show that principle will regulate the conduct of Britain in similar cases. When that shall have been ascertained I have no doubt that the course of the American government will be such as the interests, the honor & the justice of the United States require. In the meantime should I give you an opi- nion it would be only that of a private individual & of consequence it would be unimportant & perhaps improper. I am sir very respectfully Your Obed John Marshall Photograph: Chris Cunningham