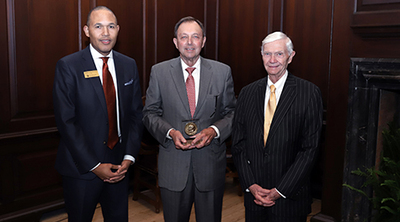 Professor Robert E. Scott J.D. ’68 of Columbia Law School received the 2021-22 Marshall-Wythe Medallion at a ceremony held in William & Mary’s historic Wren Building on March 24. The medallion is the highest honor conferred by the William & Mary Law School faculty and recognizes those who have demonstrated exceptional accomplishment in law.

Scott, the Alfred McCormack Professor of Law, Emeritus, at Columbia Law School, is an internationally recognized scholar and teacher in the fields of contracts, commercial transactions, and bankruptcy, and the director of Columbia’s Center for Contract and Economic Organization.

Hosting the event, A. Benjamin Spencer, Dean of William & Mary Law School and Trustee Professor, celebrated Scott as “a leader, scholar and legal mind…who has been called ‘one of the great law school deans of the 20th century’ and ‘the premier Contract Law scholar in the world.’”

“Bob really exemplifies and personifies the type of professor and academic and scholar that we all aspire to be,” Spencer said. “He is the model of excellence, and certainly a model of the dean that I aspire to be.”

Scott served as the Justin W. D’Atri Visiting Professor of Law, Business, and Society at Columbia Law School from 2001 to 2006 and joined the Columbia Law School faculty full-time in 2006. In 2014, he assumed the role of interim dean of the Law School. Before joining Columbia, Scott was a member of the University of Virginia School of Law faculty from 1974 to 2006 and served as the school’s dean from 1991 to 2001.

During his deanship at UVA, the School of Law embarked on a landmark capital campaign that raised more money at the time than any other law school in history; he oversaw a $50 million renovation of the law school’s grounds, developed innovative ways of promoting faculty scholarship and instituted several curricular enhancements.

“By any measure, Bob has been one of the preeminent law school deans, professors, scholars and communicators of our time,” said W. Taylor Reveley, III, President Emeritus and Former Law Dean at William & Mary.

Reveley celebrated Scott’s range of talents across the legal academy. “Bob is a master teacher, one of great prowess and renown in the classroom,” Reveley said. “He has also been a highly influential scholar, explaining and shaping the law in the crucial but somewhat mystical spheres of contracts, commercial law and bankruptcy. And he has been a dean of signal accomplishment, living the grand tradition of the citizen lawyer as a dean who has made a serious difference for students, faculty and the university.”

“Bob was appointed first by a governor who was a Democrat and then by a Republican—no small feat,” Reveley said. “Bob did enormous good on the Board of Visitors, and was one of my most cherished and most productive colleagues.”

Scott and his wife, Elizabeth Shumaker Scott, an undergraduate alumna of William & Mary and the Harold R. Medina Professor Emerita of Law at Columbia, have been very supportive of William & Mary over the years. In 2003 they established the Robert E. and Elizabeth S. Scott Research Professorship in Law, with Michael S. Green becoming the first Scott Professor of Law in 2011 and Jeffrey Bellin currently holding the position.

In brief remarks, Scott celebrated his long relationship with the Law School, beginning with his arrival in Williamsburg in September 1965 after being accepted at William & Mary and Harvard. Scott credits a full tuition scholarship and a $5,500-per-year stipend (generous for that time) with helping him choose William & Mary.

Scott soon discovered bright and engaged classmates and first-rate teachers, including former Dean Dudley Woodbridge, who taught him contracts and property during his 1L year. Scott went on to become editor-in-chief of the William & Mary Law Review and returned to the Law School for his first teaching job after earning an S.J.D. from the University of Michigan Law School in 1973.

Praising William & Mary Law School as “a nationally recognized institution known for high-quality teaching and research,” Scott urged the Law School to continue to seek being the best by pursuing self-sufficiency and using increasing financial support from friends and alumni to recruit an even more diverse faculty and student body, and expand the already rich number of curricular programs and Centers of Excellence.

Ever the law dean, Scott concluded by putting in a plug for one more goal to achieving excellence that is often ignored in current discourse.

“I urge you to continue to nurture and develop your commitment to the scholarly enterprise as the central component of a great university law school,” Scott said. “Because here is the plain truth: a commitment to an active participation in shaping the next generation of legal thought is how great academic culture is developed and persists.”