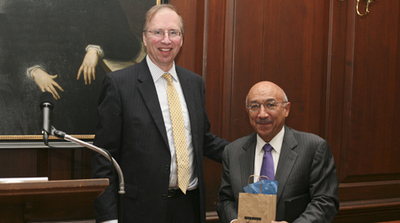 Dean Douglas, at left, presented the highest honor conferred by the William & Mary law faculty to Judge Edwards for his exceptional accomplishments in law.

Distinguished legal scholar Richard A. Epstein received the 2014 Marshall-Wythe Medallion at a dinner in his honor at William & Mary's Alumni House on Oct. 29. The medallion, presented to Epstein by Law School Dean Davison M. Douglas, is the highest honor conferred by the law faculty and recognizes members of the legal community who have demonstrated exceptional accomplishment in law. Epstein is the inaugural Laurence A. Tisch Professor of Law at New York University. He is also the James Parker Hall Distinguished Service Professor of Law, Emeritus, at the University of Chicago, and the Peter and Kirstin Bedford Senior Fellow at the Hoover Institution.

In his remarks, Douglas noted that Epstein is widely regarded by his peers as "one of the most influential legal thinkers" of our time. Few legal scholars, he said, "have written as deeply and as broadly as Professor Epstein has over the course of his career."

The qualities he brought to his scholarship--his "breadth of knowledge and desire to engage new ideas"--also made him a remarkable teacher, Douglas said. For much of his career, Epstein taught a new course every year and tackled courses not only in property law, but also in nearly every other subject in the curriculum, including, for example, business law, criminal law, employment and labor law, environmental law, taxation, and legal history.

Epstein is the author of more than a dozen monographs on a wide range of legal and interdisciplinary topics. In 1985, Harvard University Press published one of his most influential books, Takings: Private Property Under the Power of Eminent Domain. He was inducted into the American Academy of Arts and Sciences the same year.

The dean quoted what Epstein said about how he finds inspiration for his scholarship. "I have no idea what sparks ideas," Epstein said, "but I do know that if you wait for inspiration to come, it never does. So, I just sit down with a whisper of an idea and see how it all flows."

Douglas observed that members of the legal academy were "very grateful that Professor Epstein has had so many 'whispers' of an idea over the course of the past 40 years."

The Marshall-Wythe Medallion is named for John Marshall and George Wythe. Wythe, one of the leading statesmen of the Revolutionary Era, was William & Mary's--and the nation's--first professor of law. Marshall was among Wythe's first students at the College and went on to have a seminal impact on American history as chief justice of the United States.