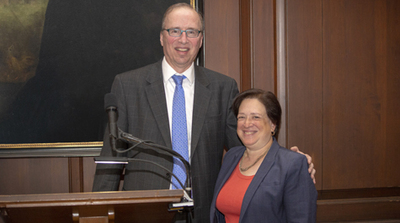 Dean Davison M. Douglas and the Law School faculty celebrated Associate Justice of the Supreme Court of the United States Elena Kagan's outstanding contributions to the law at a dinner in her honor held at William & Mary's historic Wren Building. Earlier in the day, Justice Kagan spent time with students, answering their questions and offering advice.

Elena Kagan, Associate Justice of the Supreme Court of the United States, received the 2018 Marshall-Wythe Medallion at a dinner in her honor at William & Mary’s historic Wren Building on Thursday, Sept. 6. The medallion, presented to Justice Kagan by Law School Dean Davison M. Douglas, is the highest honor conferred by the William & Mary law faculty and recognizes members of the legal community who have demonstrated exceptional accomplishment in law.

In his introductory remarks to faculty and guests during the dinner, Dean Douglas praised the diversity of experiences that Justice Kagan has enjoyed in the law. “What is so remarkable about Justice Kagan is that she has done many things in the law, and done them so astonishingly well,” Douglas said.

Douglas described a series of opportunities that Justice Kagan never hesitated to take throughout her early career. For instance, she left her teaching job at the University of Chicago Law School to join the Clinton Administration.

“She could have devoted the rest of her career to being a law professor and being very distinguished and having a great life,” Douglas said. “But she had an opportunity early on to engage in government service and she took it.”

Between 2003 and 2009, she served as the Dean of Harvard Law School. In 2009, President Obama nominated her as the Solicitor General of the United States. A year later, the President nominated her as an Associate Justice of the Supreme Court, and she took her seat on August 7, 2010.

During the evening honoring her accomplishments, Justice Kagan fielded a number of questions from faculty. Among other things, she discussed the role mentors such as Judge Mikva played in her life, and how she, too, learned to mentor. She also remembered Justice Thurgood Marshall as a great story teller, and discussed the many times the Supreme Court seeks to find consensus in decision-making.

Before presenting Kagan with the Marshall-Wythe Medallion, Dean Douglas shared written remarks from a William & Mary faculty member who could not attend the event.

“At a time in our history when institutional norms are threatened on the daily basis, Justice Kagan is a believer in, and a builder of, institutions,” the colleague wrote. “She made Harvard Law School much stronger as a dean. She made the Justice Department much stronger as Solicitor General. And she makes the Supreme Court stronger as a justice who walks into that building every day.”

The Marshall-Wythe Medallion is named for John Marshall and George Wythe. Wythe, one of the leading statesmen of the Revolutionary Era, was William & Mary's-and the nation's-first professor of law. Marshall was among Wythe's first students at the College and went on to have a seminal impact on American history as chief justice of the United States.