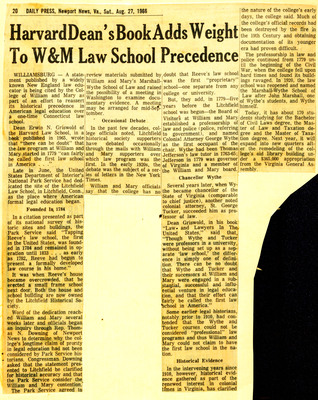 WILLIAMSBURG – A statement published by a widely known New England law educator is being cited by the College of William and Mary as part of an effort to reassert its historical precedence in American legal education over a one-time Connecticut law school.

Dean Erwin N. Griswold of the Harvard Law School, in a book published in 1965, wrote that "there can be doubt" that the law program at William and Mary started in 1779 "can fairly be called the first law school in America . . ."

Late in June, the United States Department of Interior's National Park Service had dedicated the site of the Litchfield Law School, in Litchfield, Conn., as the place where American formal legal education began.

In a citation presented as part of its national survey of historical sites and buildings, the Park Service said "Tapping Reeve's law school, the first in the United States, was founded in 1784 and remained in operation until 1833 . . . as early as 1782, Reeve had begun to present a formally developed law course in his home."

It was when Reeve's house became overcrowded, that he erected a small frame school next door. Both the house and school building are now owned by the Litchfield Historical Society.

Word of the dedication reached William and Mary several weeks later and officials began an inquiry through Rep. Thomas N. Downing of Newport News to determine why the college's longtime claim of priority in legal education had not been considered by Park Service historians. Congressman Downing asked that the statement presented to Litchfield be clarified for historical accuracy and that the Park Service consider the William and Mary contention.

The Park service agreed to review materials submitted by William and Mary's Marshall-Wythe School of Law and raised the possibility of a meeting in Washington to examine documentary evidence. A meeting may be arranged for mid-September.

In the past few decades, college officials noted, Litchfield historical society supporters have debated occasionally through the mails with William and Mary supporters over which law program was the first. In the early 1920s, the debate was the subject of a series of letters in the New York Times.

William and Mary officials say that the college has no doubt that Reeve's law school was the first "proprietary" school–one separate from any college or university.

But, they add, in 1779–five years before the Litchfield school was begun–the Board of Visitors at William and Mary established a professorship of law and police (police, referring to government), and named Colonial Attorney George Wythe as the first occupant of the chair. Wythe had been Thomas Jefferson's law tutor in 1763-65; Jefferson in 1779 was governor of Virginia and a member of the William and Mary board.

Several years later, when Wythe became chancellor of the State of Virginia (comparable to chief justice), another noted colonial attorney, St. George Tucker, succeeded him as professor of law.

Dean Griswold, in his book "Law and Lawyers In The United States," said that, "Though Wythe and Tucker were professors in a university, without being set up as a separate 'law school,' the difference is simply one of definition. There can be no doubt that Wythe and Tucker and their successors at William and Mary were engaged in a substantial, successful and influential venture in legal education, and that their effort can fairly be called the first law school in America."

Some earlier legal historians, notably prior to 1910, had contended that the Wythe and Tucker courses could not be considered "professional" law programs and thus William and Mary could not claim to have the first law school in the nation.

In the intervening years since 1910, however, historical evidence gathered as part of the renewed interest in colonial times in Virginia, has clarified the nature of the college's early days, the college said. Much of the college's official records had been destroyed by the fire in the 19th Century and obtaining documentation of its younger era had proven difficult.

The professorship in law and police continued from 1779 until the beginning of the Civil War, when the college fell upon hard times and found its buildings ravaged. In 1920, the law school was reopened and named the Marshall-Wythe School of Law after John Marshall, one of Wythe's students, and Wythe himself.

Today, it has about 170 students studying for the Bachelor of Civil Laws degree, the Master of Law and Taxation degree and the Master of Taxation degree. Next year, it will expand into new quarters after the remodeling of the college's old library building under a $365,000 appropriation from the Virginia General Assembly.