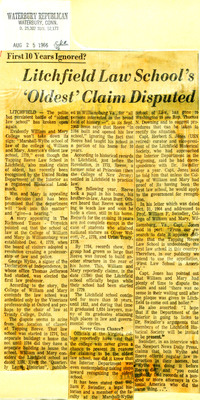 Evidently William and Mary College won't take down its sign: "Marshall-Wythe school of law of the college of William and Mary, America's oldest law school, 1779," even though the Tapping Reeve Law School in Litchfield, also making claim of oldest, has recently been recognized by the United States Department of the Interior as a registered Historical Landmark.

Wm. and Mary is appealing the decision and has been promised that the department will "look into this matter" and "give -- a hearing."

A story appearing in The Richmond Times-Dispatch pointed out that the school of law at the College of William and Mary in Williamsburg was established Dec. 4, 1779, when the board of visitors adopted a resolution creating a professorship of law and police.

George Wythe, a signer of the Declaration of Independence, in whose office Thomas Jefferson had studied, was elected the first law professor.

According to the story, the College of William and Mary contends the law school was antedated only by the Vinerians professorship at Oxford and perhaps by the chair of law at Trinity College, Dublin.

The dispute seems to arise from the location of classes at Tapping Reeve. That law school was started in 1774, but separate building [to] house the not until 1784 did they have a separate building to house the school. William and Mary considers the Litchfield school as dated 1784. Even the "Quarterly Legal Historian", published in Williamsburg Va., for "all persons interested in the broad field of history --", in its Sept. 1963 issue says that Reeve "in 1784 built and opened his law school," ignoring the fact that Reeve had taught his school in a portion of his home for 10 years.

According to historical records in Litchfield, just before the Revolution, in 1773, Reeve, a former tutor at Princeton (then the College of New Jersey) settled in Litchfield to practice law.

The following year, Reeve took a pupil in his home, his brother-in-law, Aaron Burr. Others heard that Reeve was willing to teach law and soon he [had] a class, still in his home. Records for the ensuing 10 years are not complete except in the case of students who attained national stature as Oliver Wolcott, Jr., 1778, and Uriah Tracy, 1778.

By 1784, records show, the group had grown so large that Reeve was forced to build another structure in the rear of his home. This, William and Mary reportedly claim, is the date (1784) that the Litchfield school officially began while their school had been started in 1779.

The Litchfield school continued for more than 50 years, until 1833, and during that time it graduated 1,024 lawyers, many of its graduates attaining high places in law and governmental circles.

Officials at the Virginia college reportedly have said that the college was never given a chance to present its reasons for claiming to be the oldest law school, nor did it know that the Interior Department was even contemplating taking steps toward recognizing the oldest school.

It has been stated that William F. Swindler, a legal historian and a member of the faculty at the Marshall-Wythe School of Law, has gone to Washington to see Rep. Thomas N. Downing and to suggest procedures that can be taken to rectify the situation.

Capt. Herbert S. Jones (USN retired) curator and vice-president of the Litchfield Historical Society, who had approached the Interior Department in the beginning, said he had correspondence with Dr. Swindler over a year. Capt. Jones said he told him that unless the College of William and Mary had proof of its having been the first law school, he would apply to the government for recognition.

In his letter which was dated Oct. 31, 1964 and addressed to Prof. William F. Swindler, College of William and Mary, Williamsburg, Va., Capt. Jones said in part: "From our research to date it appears definite that the Tapping Reeve Law School is undoubtedly the first law school in this country. Therefore, in our publicity we intend to use the appellation, 'First Law School in America'."

Capt. Jones has pointed out that William and Mary had plenty of time to dispute the claim and said "there was no sense in their waiting until after the plaque was given to Litchfield to come out and holler."

He also asserted: "I hope that if the Department of the Interior is going to listen to Dr. Swindler's arguments that members of the Litchfield Historical Society will be invited to be present."

Swindler, in an interview with the Newport News Daily Press, claims that both Wythe and Reeve offered regular law instruction in their homes, but "Wythe was doing it before Reeve did" and "you could probably find records of a hundred or more attorneys in Colonial America who did the same thing . . .".