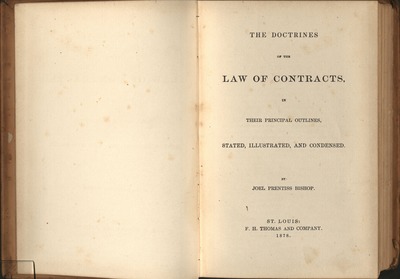 Joel Prentiss Bishop (1814-1901) was a prolific writer of legal treatises. Before becoming an attorney, he worked at the New York Anti-Slavery Society and edited an abolitionist newspaper. He moved to Boston in 1942 to edit a progressive newspaper and there began working at a law office. Within two years, Bishop was admitted to the bar and opened his own firm. He began writing treatises for practitioners as a way to build his reputation. His Doctrines of the Law of Contracts (1878) is a collection of annotated cases. It was designed to lay out the "skeleton" of contract law, according to Bishop, focusing on core doctrines and primarily American cases.