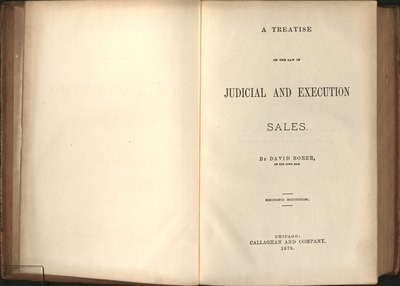 Rorer, David. A Treatise on the Law of Judicial and Execution Sales. 2nd ed. Chicago: Callaghan and Company, 1878.

David Rorer (1806-1884) studied law in Virginia before opening his own practice in Arkansas. There, he was appointed county judge before moving to Iowa. During the Civil War Rorer changed his political party and became an advocate for emancipation, though as a lawyer he had successfully represented both sides -- first defending an enslaved man named Ralph, then later, an enslaver. Rorer's Treatise on the Law of Judicial and Execution Sales (1873) covers the procedures for sale of real property, personal property, and corporate assets, by both court order and forced sale.