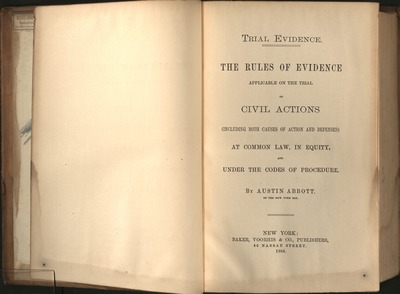 Austin Abbott (1831-1896) was a prolific legal writer, developing digests of New York laws, treatises on trial practice, and collections of legal forms. He served as defense counsel for Henry Ward Beecher (1813-1887) in the Beecher-Tilton scandal. He also served as the government counsel in the trial of Charles J. Guiteau (1841-1882) for the assassination of President James Garfield (1831-1881). Abbott prepared this treatise on the rules of evidence as they relate to civil procedure. It provided practitioners with references and explanations of the rules of evidence, along with practical applications in civil trials.