Bump's Law and Practice of Bankruptcy 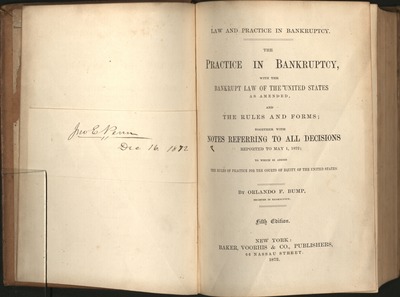 Orlando Bump (1841-1884) was one of the foremost bankruptcy scholars of his time. He was appointed Register in Bankruptcy, revised the Statutes of the United States, edited the US Annotated Internal Revenue Laws and the National Bankruptcy Register, and published several treatises. His Law and Practice in Bankruptcy (1868) became the leading bankruptcy textbook. It is a collection of bankruptcy law cases pulled from the various reporters, outlining rules and court findings.