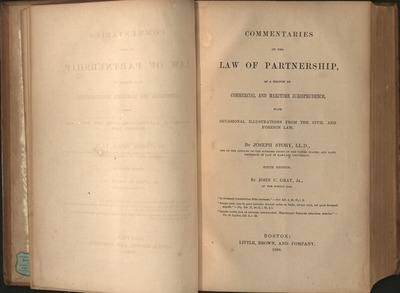 Story, Joseph. Commentaries on the Law of Partnership, as a Branch of Commercial and Maritime Jurisprudence, with Occasional Illustrations from the Civil and Foreign Law. 6th ed. Boston: Little, Brown, and Company, 1868.

Joseph Story (1779-1845) was the youngest justice ever appointed to the United States Supreme Court, serving from 1811 to 1845. He was a prolific legal writer and well-known scholar, and his works influenced the writings of many other legal authors -- several of whom can be found in the Wolf Law Library's Harris Collection. Story's Commentaries on the Law of Partnership (1841) was developed as a resource for students and practitioners. It gives the rules of law and court reasonings supporting those determinations, along with explanatory comments. The treatise provides the history and sources of law of partnership, citing Roman and common law. Moreover, it defines the partners' rights, duties, obligations, powers, and limitations with regard to other partners, third parties, and the outside world.