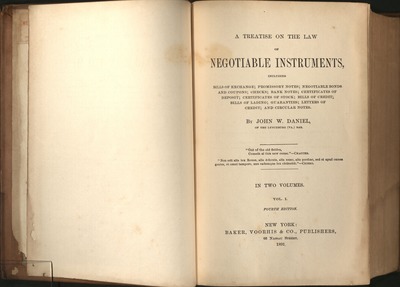 John Warwick Daniel (1842-1910) was a lawyer, author, and politician from Lynchburg, Virginia. He served as a major in the Confederate Army before attending the University of Virginia and was admitted to the bar in 1866. He later served in the Virginia General Assembly and represented Virginia in both the House of Representatives and the Senate. His Treatise on the Law of Negotiable Instruments (1876) discusses law and policy relating to each type of negotiable instrument. It does not, however, follow the proposal made by Justice Joseph Story (1779-1845) to realign doctrines relating to similar instruments. Instead, Daniel presents the prevailing doctrine of negotiable instruments, organized by creation, relevant parties, and negotiation.