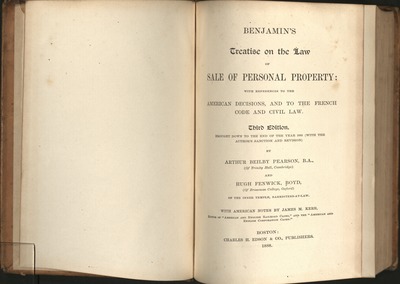 Benjamin, J. P. Benjamin's Treatise on the Law of Sale of Personal Property, with References to the American Decisions and to the French Code and Civil Law. 3rd ed. Boston: Charles H. Edson & Co., 1888.

Judah P. Benjamin (1811-1884) was a United States Senator from Louisiana and the first member of the Jewish faith to serve in the Senate who did not renounce his religion. He also served as a cabinet member for the Confederacy, first at the Attorney General, then as Secretary of War, and finally as Secretary of State. He fled to England in 1865 as the Civil War drew to a close and Reconstruction began. Once in England, he resumed his legal career as an English barrister. Benjamin's Treatise (1868) is a practical reference of recent and precedential cases that summarizes topics under the law of sales and outlines major differences in application from the United Kingdom.